Translating a website in another language is actually a very difficult task. Here are a few of the words I translated from the drop down menu for the land survey website. One I had these translated I chose staðfræðikort which translated into topography map however once here there are still a multitude of options, so I have been opening up each one to see where it is and the ones in Austerland (the Eastern Region, where Skalanes is located), are on the Lagarfljot river. I am now continuing to plow through the maps here and will switch keyword if need be.

Weeks of 29 November and 6 December:

Lots of FISC meetings and grading, this week promises to be similar. Working with K and T on list management with Kanbanchi was the only directly useful thing I did this week. Replying to Oli and GPS setup are the things I’d most like to work on this week. GLI appears to be ready to support our proposal for Field Science as Wilderness so we can begin to plan that in more detail.

Only being here for half a week, I didn’t really get that much done. The little bit that I did do was not in the area of Android, but in the area of logistics, since I am part of that team.

I started to look into flights and what the best possible arrangement is. I’ve started a document, which you can find in Field Science -> Iceland 2016 -> Logistics, called Possible Flights where I’m keeping track of what I find. Each possible option is in the form of a table. The table documents the departing and arriving cities and times/dates and any layovers that will occur. So far, I have one arrangement in the document, and below I’ve documented my general findings.

Since many of us will head to XSEDE in Miami right after we leave Iceland, it’s not really optimal (as of the flights I’ve found right now) to buy a round trip to Iceland. That means we will have to buy a lot of one-way tickets, which is what we ended up doing two years ago. However, one-way tickets straight to Iceland from Dayton or Indy are extremely expensive — more than just a round trip ticket. I guess they don’t want you buying a one-way there. I suspect it’s partially because of the small size of those airports. One-ways from larger airports are much cheaper. That’s why I think we would buy a one-way ticket to a larger airport (say Toronto, for example), a round trip from that airport to Iceland, then a one-way to Miami, and another one way back to an airport close to us (Indy or Dayton for example, or Columbus).

I worked some with Charlie and Tara on figuring on Kanbanchi to use for keeping track of to-do things. It looks like a really nice and useful tool. We figured out the hierarchy of it in terms of our projects… refer to Tara’s post for more information on the exact hierarchy. I’ve started making one for Field Day and those tasks, which you should be able to find in the Field Science -> Software folder.

This coming week, I hope to finish the Field Day Kanbanchi to-do, work some more on Android, and talk to Charlie about who’s going to go to Iceland next summer. Though, I might not get as much as I’d like to done, since I have a lot of interviews to do with CS tenure-track candidates.

This week Kristin, Charlie, and I met a few times to figure out how to best utilize the Kanbanchi drive app for keeping track of progress on projects. Charlie made sure we had a solid framework of common terms to work with:

list – the columns in the kanbanchi layout. The different lists within each project are determined at the project level.

cards – the individual items within a list. Broadly speaking, cards are like tasks. They can be assigned to anyone shared on the document. They can contain documents, checklists, and tags. Cards can be given a ‘flag’ that is named by the user. Cards can be given a color. We decided that green will signify tasks we are working on actively, yellow will signify tasks we have not yet started, red will signify tasks that were started but then ran into some sort of trouble (no supplies, something broke etc), and grey tasks we have completed (cards also have a ‘done’ checkbox, for the extra satisfaction factor).

Here is a picture of my kanbanchi layout for the soil sensor platform: 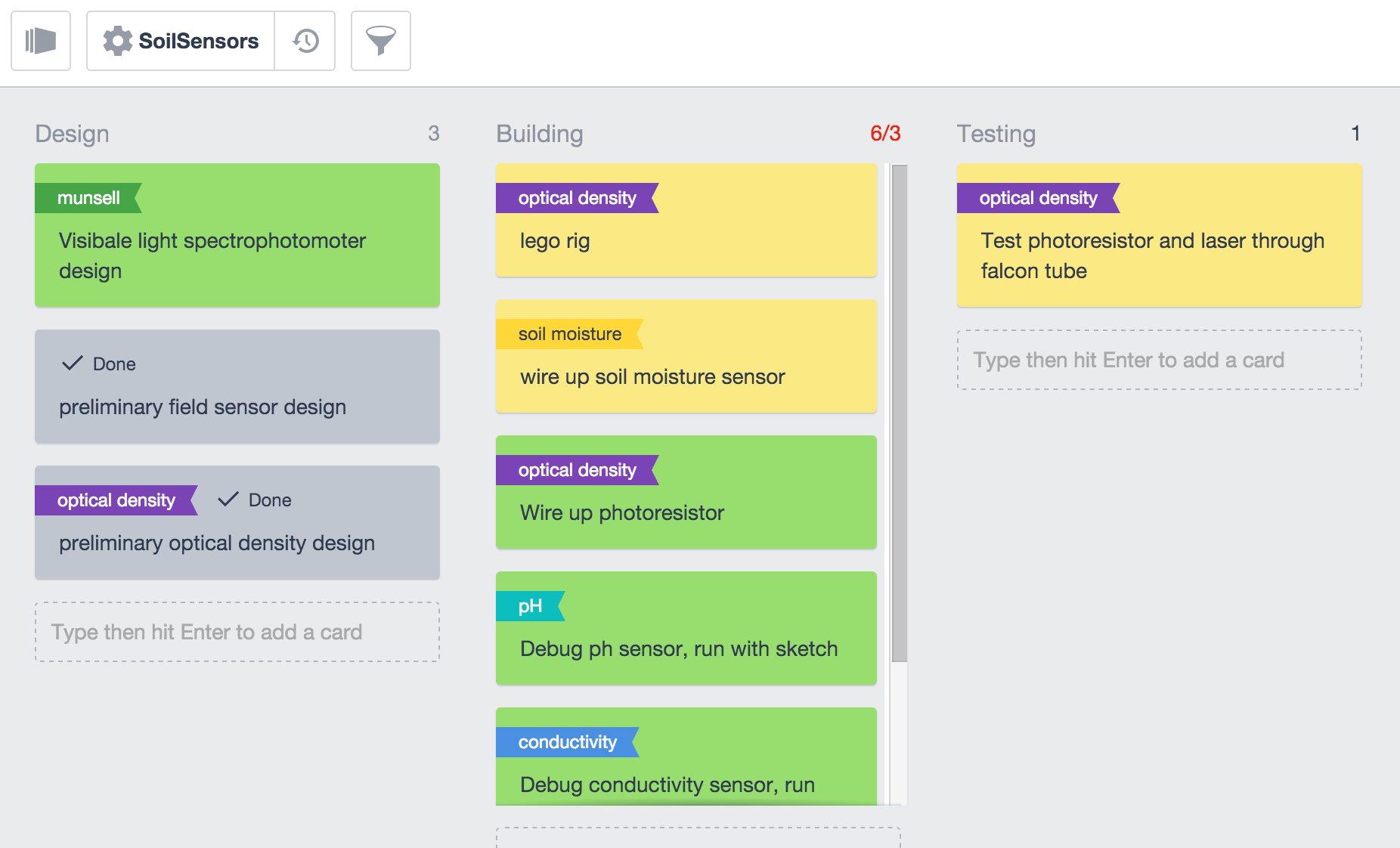 Sensor-wise, I am working on debugging the ph and conductivity probes. I have not been able to get any serial output from them but arduino isn’t given me any errors. My goal this week is to figure that out and to get the soil moisture sensor and photo-resistor hooked up and working with basic sketches.

Until the last few weeks, I had been assuming that we would be looking at using a quadrocopter for this research. I knew this was going to involve a lot more engineering than a balloon or kite, but until looking into it a few weeks ago, I didn’t know how much more.

Essentially, all the parts must be extremely well balanced, and thus tolerances for various parts are very, very low. This drives up manufacturing costs and makes fabricating our own parts with a 3d printer/whatever extremely time consuming and in the end, not really viable. This is compounded by increased software complexity, which I know we are all OK with conceptually, but in practice is not realistic or sustainable. Once we are in Iceland, we don’t want to need to minimize maintenance and not have the most fragile setup possible.

The only benefit of a rotary wing UAV is the ability to generate lift without horizontal thrust, which is not what we require. We are doing one long continuous flight, criss-crossing a terrain. This problem is best suited to fixed-wing UAVs, which are simpler to maintain and fly, can carry greater payloads and are not as sensitive, are much, much more efficient at generating lift, and if we run out of batteries, can glide down to earth. The biggest downside to fixed wing designs is the need for horizontal thrust to generate significant lift, making horizontal takeoff/landing necessary. This is not a problem in Iceland, where we have plenty of space. This is all leading to the final point, which is that this limited lift which can be generated by a rotary wing UAV means a payload would keep our flight times below 20 minutes, making mapping outside of a small radius around us difficult. I think we could easily get up to an hour or more on a fixed wing design with a payload with the same (if not smaller) budget.

So, in summary, even though it’s way less sexy, the fixed wing aircraft is our only real option. My next course of action is contacting old friends who are either hobbyist UAV flyers or in aerospace.

A lot has happened in the last few weeks, so I haven’t really had time to build a kite or really explore that possibility any further. In the mean time, I’ve worked on UAV possibilities we can look into, specifically UAV designs which promote longer flight times. Most of these have been fixed wing designs, which tend to be less of a drain on batteries. One particular inspiration is the Silent Falcon drone, which is designed for LiDAR work, and has 5-12 hour life depending on wing configurations. Building such an aircraft would mean getting carbon fiber moulding equipment in the shop, which I think will be useful no matter what drone we decide to build. Carbon fiber is pretty much the standard for quality UAV solutions, and it will make sense to make as much out of composite materials as we can.

Im taking a short break from android dev to focus on getting the energy survey going. I have weather statistics from weather station 620:Dalanagi which is right across the peninsula from Skálanes. According the these statistics the average wind speeds is 6.4m/s (~14mph) which is good news! Basically we can fly drones no problem! Even the most basic commercial drones are capable of flight in anything less than 7.1m/s winds and because of the average wind speed being 6.5m/s there is sure to be enough days where flight will be possible. Lets start with the non-dispatchable energy sources, those that can’t be throttled on/off. In terms of the energy survey… having dived in to those numbers a bit more… while the average is only 6.4m/s, Skálanes experiences some harsher winds of up to 22m/s during storms. Because of its coastal location it looks as though when its sunny it is relatively calm winds and when theres no sun present its generally windy – 3m/s to 8m/s winds respectively. What this means is that wind and solar will supplement each other quite nicely (at least during the summer). Solar is a little bit trickier of a topic because Iceland has fairly low insolation (measurement of solar energy) because of its latitude. The most practical way of measuring solar will be in field using smaller solar panels, followed by simple math to calculate a full array.