Last week, the bean arrived! We got four beans in the mail, which came with a ‘Maker Kit.’ The Maker Kit really just contained some headers, a buzzer, and your basic accessories. I was able to connect to all four of the Beans through my computer and my phone! It’s pretty cool that you can connect and upload code right from your phone. The ‘Bean Loader’ computer application integrates with Arduino really well. You write the code in the Arduino IDE, and just send it to the Bean through the Bean Loader. I followed this guide OSX Starting Guide to get started using the bean with my laptop. This is the guide I followed for iOS Guide for setting it up on my iPhone.

Unlike most Arduino board, the Bean has no headers already soldered in. We don’t want to solder right away. We still need to make a prototype and test that it works. So, what I did was set up a little prototyping configuration using a breadboard and some wires. You can see it below — it’s a light sensor. The LED on the Bean gets brighter as it detects more light and dimmer as it detects less light. I was able to get this running with the Bean Example Projects page. 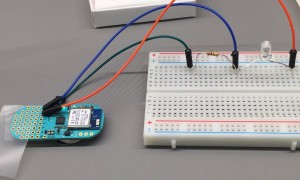 I’ve been looking through different websites like MakerShed, SparkFun, and Adafruit for different ambiance type sensors. There are many options to choose from, that have a wide range in prices. What sensors to get, we should probably decide as a group. Also, the Bean has a built-in Temperature sensor that we need to test, and perhaps we could cross that off the list of sensors to buy.