Hello all, it’s me again, Kathryn! Today we put our tourists caps on again and went to the National Museum. The museum was incredibly informative, it told the story of the people of Iceland (how they got there, who they were, and what they became). My favorite exhibit in the museum was of the bath-house (I don’t recall the name in Icelandic). What is interesting about the bath-house is that it slowly evolved into the main-house because it was the warmest place to be. My favorite place in the museum was this little corner on the second floor where there was a chess table next to some books with some extremely comfy couches (I almost feel asleep there!). 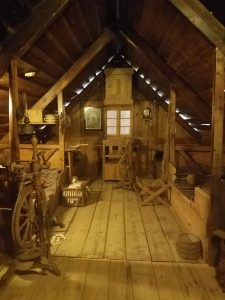 This is the bath-house that in it’s later stages no longer resembled one. 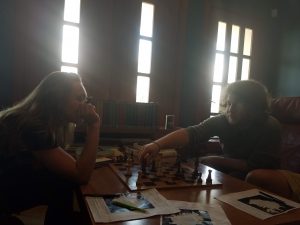 This is the little nook I mentioned above. Sydney and Porter played a game of chess. You can take your guess on who won.

After the museum we headed to the Althing (the oldest and first form of Icelandic government). The location of the Althing is important for both historical/cultural reasons and geological ones. The Althing is where the North American and European plates are separating to form new land. 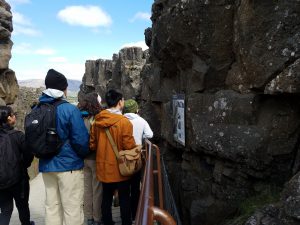 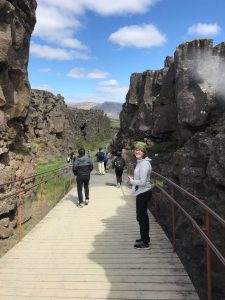 Currently Lilli is between the North American (right) and European (left) plates. This walk way leads to where the Althing was held. 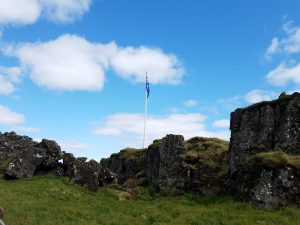 This is flag is where it was held. The Althing was a long event and folks would set up tents to claim their spot, and you can still see those imprints in the ground. 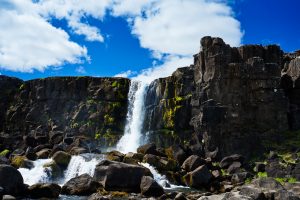 A little past the Althing is this beautiful waterfall, the first one I’ve seen in Iceland (I have been told that there are many waterfalls in Iceland). The nice thing about Iceland is that because the water is so clean, you can re-fill your water bottle there. And I can tell you that it is the best water I’ve ever had.

After finish touring the Althing, we left to go see another, much bigger waterfall. On the way, we were able to see Hekla (by some miracle) through the haze, and drove through the town called Geyser. Interestingly, geysers (the geological phenomenon) is named after the town because there are so many of them. We did not stop there because according to E and C, it is just a tourist trap. 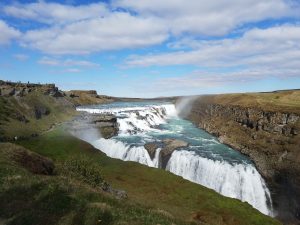 For size reference, there is a trail on the right side of the photo where people are walking. 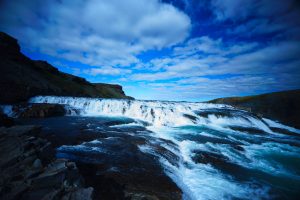 This is a much nicer photo of the waterfall courtesy of Roger and his fancy camera. 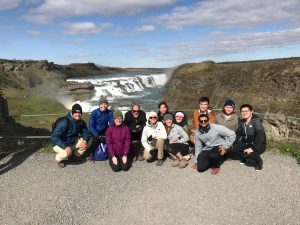 And the obligatory group photo and a rainbow in the background.

To finish off the day Mubi served everyone an absolutely delicious meal of stir-fry ramen. Well, it’s time for bed for me, even though it’s still light out (that’s going to take some getting used to).