Hello! My name is Sydney, and I am a rising senior majoring in chemistry and minoring in math and physics. While in Iceland, I have been doing work with soil analysis and archaeology.
If you are interested, our research in Stöð was recently featured on the Icelandic news starting at 5:23.
The last few days we have been at Skálanes, where we will be for the next week doing scientific research. Skálanes is owned by Óli and Rannveig and is located at the mouth of the Seyðisfjörður fjord. On the property one can find many creatures such as seals, whales, reindeer along with several species of birds including arctic terns, eider ducks, and puffins. Skálanes also has several registered archaeological sites, which is what our program is really interested in studying. The house has a lab for scientists that come stay on the property, and several rooms with beds amongst the home. The property makes money by letting scientists stay on the property, performing tours of the house, and selling eider duck down.

To get to Skálanes we left Seyðisfjörður, where we spent a night, then we drove out of town and crossed three rivers before arriving at the house. The car dropped us off at the first large river and then we hiked 4km to the house with our day pack. Our larger bags were brought to us by a car that crossed the rivers.

Our first day we unpacked, met Freyr (a cute chocolate lab that lives on the property), and a group of six student from Glasgow university in Scotland. The computer science group did work on ODM (Optical Drone Map) and prepared the drones for the trip tomorrow. They hope to make some images of the area that will give the soil group a promising area to collect data.
I built shelves for the wet lab in the house for Óli with Kathryn and Kaela.

There was a lot of down time our first day, and we got to enjoy the peaceful atmosphere and learn from the other students living here. There is a possibility to camp if we want, so I hope to be able to do that.
Our second day, it was unfortunately was too foggy and wet for the drones to fly, but it gave the computer scientists more of a down day than they’ve been having and they were able to focus on coding more of the programs we have been using. The soil group did research on how to distinguish between the tephra layers in the soil. Tephra layers are formed volcanic ash, and we can link them to certain eruptions, and hense have a dating tool.
The soil group then joined Rannveig after lunch to start preparing the site where we will be excavating soil from one of the 96 (I think that’s the right number). Rannveig was really excited since it was the first time she had applied for permission to excavate a site of her own. Freyr hadn’t seen her in two weeks and followed us so he could be with her. To prepare the site, we used a GPS to mark the area we were excavating and Rannveig chose a square meter she thought looked promising. We pulled the grass off of the top and then started excavating by gently scraping at the soil layers with a trowel and putting the dirt created in a bucket to dump nearby. We had to be careful that we weren’t disturbing any potential artifacts. We found charcoal, so there was definitely human activity in the square chosen, and Rannveig thinks it could be a midden heap, so I’m excited to see what we keep finding. 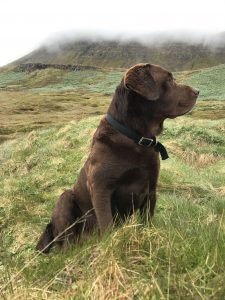 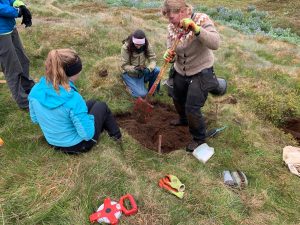 When we got back to the house, Kaela and I made banana bread with the bananas that are way past ripe. It was ready in time for dinner and turned out better than I was expecting considering we multiplied the recipe by 10.