Since my last post, I have successfully booked all of our accommodations up to Akureyri. In the South, there was one Airbnb that was directly in the middle of the two large places we want to go (Laki and Solheimjokull) and is also in the town Kirkjubaejarklaustur (a.k.a Klaustur) that is in the Island on Fire book and talks about the Reverend Jón Steingrímsson and the sermons, later to be called ‘the Fire Sermons’ that were given when the Laki volcano erupted. So, we decided that we would book that for the three nights we are in the south and then something else for the southeast. In the southeast, I found an Airbnb that is an old farm house on the coast with an organic farm. It looks really nice and from the description it looks like we’ll get to have quite a few interactions with the host. After that we are on our way to Skalanes where we already have accommodation. Akureyri was another Airbnb for three nights. I’m still working on where we are going to stay for the two nights in the West. I’ve found some Airbnb’s, I just have to confirm those with Charlie. It’s difficult to find places close enough that we don’t feel like we’re moving constantly, but close enough to attractions in the West that we won’t have to drive that far to see. I’ll have those figured out and booked this week. So far, we’ve stay significantly under budget! We had budgeted 60 per person/per night and with 7 people and 22 nights that comes to around $9240. Without the West booked, we are at $3613. Even if we were to use the 60 per person/ per night for the two nights in the west, we’d still only come out at $4453. This does not include Skalanes. We don’t know how much that is going to cost, but Oli is really hoping we won’t have to pay anything. We haven’t had confirmation on that yet, though.

Other logistics: I also booked our ferry to and from Heimaey, and we’ve figured out our car situation. We are going to get a 7 seater SUV and bring rope to strap down our luggage on the top. It’s more practical for some of the roads we travel on. We had some trouble in the highland roads wit the 9-seater on our last trip. This SUV is a 4×4 car and is suitable for the highlands. It’s also less expensive! I also started working on a map, just placing points that are our accommodations or places we’ll stop. 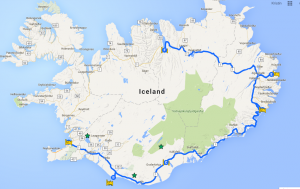